How To Close Apps on iPhone 11

Are you dreaming of getting an iPhone or already have one? If yes, you must know all the iPhone model’s features and specifications. Having the best Smartphone – iPhone isn’t enough but getting a comprehensive idea to know about it is also essential.

The reason? iPhone is a complete package to explore Apple’s latest functions, from downloading App store applications to using some personal filters.

Can you bear being bullied for not knowing the features of the iPhone 11? Not!

Swiping apps to remove them from the multitasker carousel is not the right way to close apps on iPhone 11.

Have you been doing this all your life?

If yes, then stop right away and read till the end of this article. By the end, you will understand the handiest tricks to close all apps on iPhone 11.

What are Closed Apps on iPhone 11?

There is a massive difference between closed apps and opened apps on iPhone 11. Still, hundreds of users never understand the critical point. First of all, let’s get an idea of which apps are closed in an iPhone 11 and how to identify them.

Any phone application that is not shown on your iPhone’s screen is considered to be closed automatically. This means that no matter if you assume it to be opened in the background, it is not.

Just some of the aspects of this application can be stored in the RAM. However, the application itself is neither consuming any of your iPhone 11 batteries or power.

In simple words, any application on an iPhone 11 that doesn’t come on the screen is potentially closed on its own. So, you don’t have to close it again.

Do I Need to Close Apps on iPhone 11?

Now, you might be wondering about what the applications in the multitasker are meant for? Some of the applications in an iPhone 11 are semi-closed which means that they might not be running in your phone’s background, but they can still access your location and data.

If you want to take screen shot on snapchat without letting anyone know! Click here.

Such a situation calls for you to close your iPhone 11 through the most-followed typical steps of closing apps in an iPhone 11.

Are you not getting the clue to close applications on your iPhone? Don’t worry! To close your applications in iPhone 11 and onwards, go through the three simple steps mentioned below.

#1 Swipe Up from the Bottom

Swipe up from the bottom of the iPhone 11 screen. Just pause at the midway. Make sure not to put much pressure on the screen.

#2 An App Switcher Will Pop Up

Right after you swipe up from the bottom of the screen of your iPhone 11, an app called switcher will pop up. It will look something like the one shown in the figure. 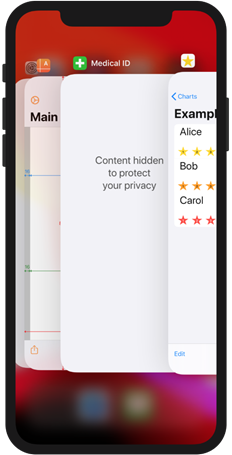 To close the apps on your iPhone 11, swipe up through each application to permanently close its operation on your iPhone. Once you are done, all of the apps will be completed, and none of them will be able to consume your iPhone’s battery power or access your data unless opened again. 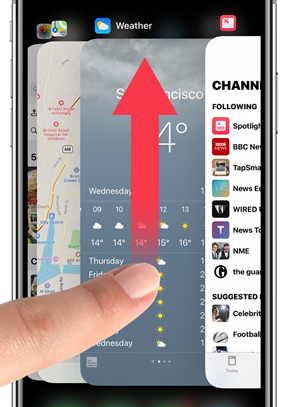 Now you all know how to close apps on an iPhone 11. What if we tell you that closing apps aren’t enough?

Swiping up and closing apps through the multitasker is not just closing apps on an iPhone. There is another term used for this method which is called “Force-Quitting Apps.”

Force Quitting Apps is just swiping the apps upwards through the app switcher. Implying that what we believe to be closing apps on iPhone 11 is nothing but force-quitting apps.

Nevertheless, this technique is considered an incredibly wrong way of operating iOS. The iPhone 11 comes with a built-in function of dealing with standby apps. Therefore, you don’t need to close any app to reduce battery consumption manually.

iOS Systems are not designed to require users to operate and carry out functions on their own. This is why iOS Systems are known to be one of the best-operating systems in the world. As soon as an application runs in the background, the iPhone 11 operating system freezes its memory and stops running.

Thus, it is pretty clear not that an iPhone 11 doesn’t need the user to touch any application at all.

The game is all about freezing and unfreezing a background application. Things get a bit worse when you have to force quit an app in iPhone 11. This would cause the operating system and the iPhone’s CPU to consume more, consequently affecting its performance.

Would you instead open an unclosed app that has been frozen or forcefully remove an app from functioning? If yes, stop it right there! As it’ll have a direct impact on your phone’s health.

We suggest choosing the option that is not forcefully quitting apps on your iPhone 11, which is the key.

The most crucial factor that leads to an iPhone’s life is its battery health. As soon as it starts declining, your iPhone’s worth gets low. Forcefully quitting apps on an iPhone 11 could result in drastically affecting your battery health, making it worse.

Therefore, do not try closing your iPhone apps through a manual method. Instead, iPhone 11 can trust the iOS system to automatically freeze the apps and stop them from working until someone opens them again.